Ischebeck Titan have a proven track record of working with Sir Robert McAlpine on other technically challenging projects, and this, along with our designs for the various elements of this structure and our range of products ensured we were appointed.

Challenges were to be overcome in a variety of areas:

1 The design of the structure was highly complex, with four floors all differing in design. The main theme running through the floors was an oval shape on plan with radial beams spanning from the outer ring beam to the inner ring beam

2. The concrete is exposed in many instances so the finish was extremely important to the architect

3. The structure was a four storey concrete frame being ‘bolted’ onto a live theatre, therefore noise levels and hours of working were key considerations

4. The site had a very small footprint, boarded by two existing buildings and two main roads in the city centre. The structure itself takes up virtually the whole space, meaning that deliveries to site had to take place when a temporary lane closure on one of the roads was granted.

The first products to be supplied by Ischebeck Titan were the Climbtrac and NOEtop wallform systems, which enabled the lift core to be built. Use of our newly introduced NOEtop stripping corner was a big success, with many onsite personnel providing positive feedback.

The Ischebeck Titan Support system provided a support and access deck for the beam and slab structure. The floor was constructed in two phases, first the outer and inner ring beams and the radial beams were poured as one. The moulds for the beams were then stripped and a second support system was erected between the beams for the slab, which was then poured over these beams. Our SF100 column clamp arms were also used as mini-type soldiers to the timber moulds.

The Ischebeck Titan EPS Edge Protection System was used throughout the project and we also had another use for our Titan Support system; a fan protection system was designed using Titan and beam components – the inclined platform would stop small items landing on workmen and the public if they were to fall from above. The platform was inclined towards the building so that the objects bounced in rather than out towards the pavements.

This image shows the 2nd floor, the outer and inner ring beams and the radial beams have been poured from approximately 4 o’clock to 1 o’clock. The SF100’s are still on the moulds from 10 o’clock to 1 o’clock and at 9 o’clock the two joiners are fixing the plywood on top of the Titan beams. At 5 o’clock another two joiners are overlaying another level of plywood in a configuration such that the joints meets the architects requirements. 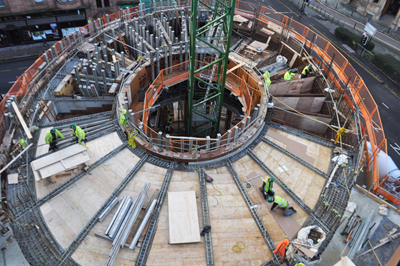 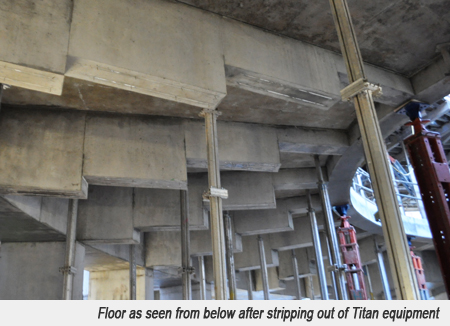